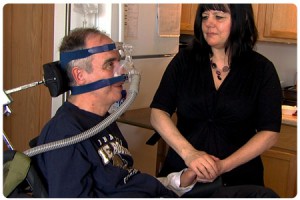 ALS stands for Amyotrophic Lateral Sclerosis and is sometimes more commonly known as Lou Gehrig’s disease. It is a rapidly progressive and fatal neuromuscular disease that is characterized by degeneration of a select group of nerve cells and pathways (motor neurons) in the brain and spinal cord. This loss of motor neurons leads to progressive paralysis of the voluntary muscles. The heart is not a voluntary muscle, and therefore it remains unaffected by the disease. However, since breathing is controlled voluntarily by the chest muscles, death usually occurs when the chest muscles are no longer able to help the lungs achieve adequate oxygenation. Generally there is little impairment of the brain, sight, touch, hearing, or smell.

ALS/MND is not contagious, but it is fatal. For the most part, the battle is short, with 80% of people losing their lives within two to five years of diagnosis. While between 10 and 20% of people may live ten years or more, sadly others end up lasting only a few months. Research is being conducted in areas relating to genetic predispositions, viral or infectious agents, environmental toxins, and immunological changes.

For some people, the muscles for speaking, swallowing or breathing are the first to be affected. This is known as Bulbar ALS. The term “bulbar” refers to the motor neurons located in the bulb region of the brain stem, that control the muscles used for chewing, swallowing, and speaking. ALS/MND symptoms, and the order in which they occur, vary from one person to another. Each person’s journey with ALS/MND is unique and can vary significantly from person to person.

In 85% of cases ALS/MND effects the lower portion of the spinal cord first. In these cases muscle weakness, cramps and weakened reflexes effects the muscles in the arms and legs as the first signs of ALS/MND. The rate of muscle loss can vary significantly from person to person, with some patients having long periods with very slow degeneration.

Are you a Person living with ALS/MND?

After a diagnosis of ALS/MND (Lou Gehrig’s Disease), a disease for which there is no known cure, many people will search for any information that can keep their hope alive. Many will look to alternative treatments to minimize the devastation that they are feeling.

The ALS Society of Canada has a policy around alternative treatments which clearly states that the society will assume no responsibility for treatments undertaken by a client without approval by a physician.

As a unit of the ALS Society of Canada, we must adhere to this policy. However, ALS Society of Manitoba is interested in knowing what some of the “alternative treatments” being tried are, and whether clients feel that these treatments have been successful. We would like to gather this information and compile it so that all clients may have access to it. It is the choice of each client whether to pursue any of these treatments.

Many of our clients here in Manitoba have indicated that this kind of information would be helpful recognizing that there is no known cure at this time, and that medications that may help can be costly and are often not on the “approved” lists of many insurance companies.

E-mail us at HOPE@alsmb.ca to add information to our listing, or with any comments on this subject.

Is it a Rare Disease?

ALS/MND is not considered a rare disease. Approximately 3,000 Canadians currently live with ALS/MND. Two or three Canadians lose their battle to this devastating disease every day. In Manitoba, more than 430 people have ALS/MND at any one time. Between 5 and 10% of ALS/MND cases are found in the same families, meaning that they are “familial”, and are definitely linked genetically. But for the most part, diagnosis is sporadic and we don’t know how it is caused.

What are the early symptoms?

ALS/MND usually becomes apparent either in the legs, the arms, the throat or the upper chest area. Some people begin to trip and fall, some may notice muscle loss in their hands and arms and some find it hard to swallow and or slur their speech.

ALS/MND is difficult to diagnose. Unfortunately, there is no specific test available that will either rule out or confirm the presence of ALS/MND. Diagnosis is usually made through the process of eliminating other possible diagnoses. Neurologists conduct a number of tests, thereby ruling out other disorders that may cause similar symptoms.

What are the effects of ALS/MND?

ALS/MND frequently takes its toll before being diagnosed, many patients are debilitated before learning they have ALS/MND. The disease usually does not affect the senses – taste, touch, sight, smell, and hearing – or the mind. ALS/MND wreaks a devastating effect on patients as well as their families. As they cope with the prospect of advancing disability and eventually death, it consumes their financial, physical and emotional reserves. It is a costly disease, demanding both extensive nursing care and expensive equipment.

It is estimated that the total cost for an individual living with ALS/MND is between $200,000 and $400,000, with minimal assistance through the government, if clients and families were to absorb this cost.

What can be done about ALS/MND?

There is no known cure at this time and very little in the way of treatment that will have an effect on the disease itself. However, there is much that the health care community does to ensure quality of life care for the person with ALS/MND.

Is there hope for people with ALS/MND?

Research is looking to find not only the cause of the disease so that a cure can be developed but also other medications or treatments that can help until a cure is found. With improved knowledge about ALS/MND, healthcare providers and families can help People Living with ALS (P’ALS) live life more fully. The services offered by ALS Society of Manitoba help improve the quality of life for those who live with ALS/MND and their families.